Another interlude: this one a visit to the lovely city of Munich, where I spent three months during my gap year (over three years ago now - shocking). This time was different, however, as I was staying in a youth hostel and meeting up with Fi, Munich being a sensible midpoint between Aachen and Kapfenberg. I set off early on Saturday morning, and was hoping that the four-and-a-half-hour train journey would provide me with beautiful panoramas of the German countryside. Sadly it was not to be, as the weather was persistently white all day. No rain, no sun, not even any noticeable clouds. Boring.

The ICE trains provide their own in-train entertainment, though, in the form of a little monitor at the end of carriages which shows you how fast the train is going. I was suitably impressed when it reached the 200kph mark, then my jaw dropped as it powered its way up to and beyond 300kph without even breaking a sweat. (Metaphorically speaking.)

Seeing Munich again on the approach to the station hit my memory like a double decker bus. I think the brain must work in different ways when observing things that it expects to see and when observing things that it expects not to have seen before. I must have travelled the stretch of track between Pasing and Munich Hbf at least 100 times, so it was firmly imprinted somewhere deep in my memory... and when I looked out of the window, expecting to be surprised, I felt the recognition wash through me in an instant. It's a strange feeling.

That evening me and Fi went and explored the town a bit. 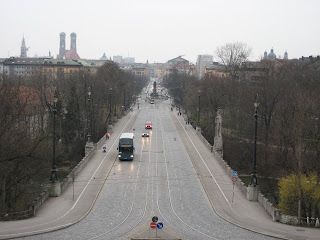 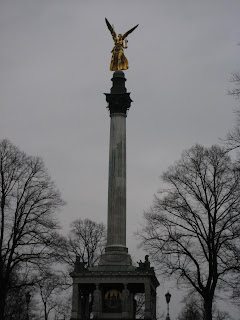 "It's a golden angel on a stick," as I so elegantly put it. Quite, George.

The next day we got on the S-Bahn and travelled out to the south, where there was a lake, the Starnberger See. We walked along it for a while in a leisurely fashion. Luckily the sun was out that day. In fact, it was generally lovely. On this journey Fi showed up my ignorance by asking what the S in S-Bahn stood for. I didn't know (I do now). Do YOU? 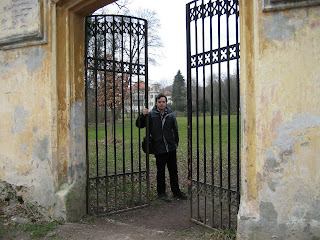 Me in a gate in front of the Schloss Possenhofen, next to the lake, where the Empress Elisabeth ("Sisi"), a much-loved figure in Bavaria, Austria and Hungary, spent her childhood. 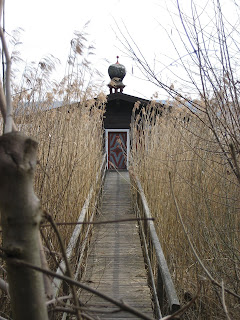 View along the gangway to a house on stilts on the edge of the lake.

On Monday we tried and failed to visit the Pinakothek der Moderne art gallery. It's closed on Mondays. :( So we went and climbed a church tower instead, the "Alter Peter", in between flurries of snow. 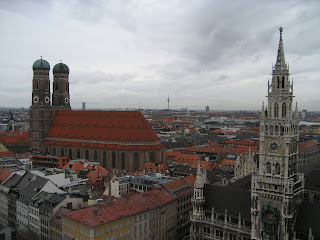 The Frauenkirche and the town hall tower, viewed from the Alter Peter. 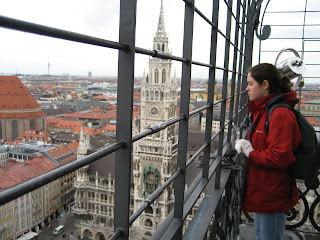 Fi on the top of the tower, with the Rathaus in the background.

Thanks to Fi for spotting this one, at the station as we were about to go our separate ways. It's the last of the new spring varieties.

Marc de Champagne Truffle: 6/10
Between Half Dark Chocolate and Amaretto Truffle. It was tasty, and particularly flavoursome compared to the other liqueur varieties, but I don't think champagne has the right texture to sit well with chocolate. I've tried this at several New Year parties with a tub of Quality Street and a few glasses of real champagne, and have always regretted it a short while later. Champagne is a light, uplifting drink, whereas chocolate is deliciously heavy and clogging. The combination of the two is trying to reconcile irreconcilable opposites, in my opinion.

So another wonderful weekend, all told. Thanks to Fi for being excellent company, and to all of you: join me next time for (probably) Act 2 Interlude (Family Visit) (if I don't get round to blogging earlier, that is) (and I almost certainly won't)!
Posted by George Walkden at 6:58 pm No comments:

Yep, I went back to Cambridge. Nearly two weeks ago, now, in fact. I only stayed a short while, flying out on a Thursday evening and back on Saturday. Luckily it was sunny and pleasant almost all that time. Big shout out to Muso Dave, who put me up for two nights and with whom I went to see a film, Hot Fuzz. A film, moreover, that was damned good. Go to see it if you get the chance. I haven't seen a film as funny since The Patriot, and this one had the advantage of being intentionally funny. We also went out for a meal at a restaurant called the Ugly Duckling. Nice, but the prices were totally unjustified. You cannot charge £5 for a bowl of plain noodles. You just can't.

The next day I had a good supervision and a tasty pasty lunch, and in the evening I joined a group of techies for a meal. I felt a bit out on a limb, because I wasn't a Return To The Forbidden Planet lampie, unlike all but one of the others there, but that didn't stop the conversation being enjoyable and the food from being quality pub grub. The grease-fest was continued the next day, when I joined Omega for a buttery brunch and a good long chat. Finally, I wandered around the Backs for a while, then went to replenish my stocks of books.

The real winner was the transport system, who got my seal of approval. The whole journey went without a hitch, except the last stage, when the train got stuck 2 stations from its destination at 1am and stayed there for forty minutes. It did provide me with one of the more interesting passenger announcements I've heard, though. Liberally translated from the German: "Ladies and gentlemen, this train will be delayed indefinitely due to construction work on the line. If you look out of the windows to your left, you will see a lunar eclipse."

The spring varieties are out now. I've only had a chance to sample two of them, so far, and I figure that there are three... but there's plenty of spring left for me to track it down.

Egg Liqueur Truffle: 3/10
I must confess to never having heard of egg liqueur before tasting this variety, and I'm no better off for knowing. It really felt like drinking raw egg encased in chocolate. Bloody weird, and a bit scary. This one fits into the league table between Lemon and Coconut. Unimpressed.

Coconut Batida Liqueur Truffle: 7/10
Best liqueur variety so far, surprisingly (unless you count Rum, Raisin & Nut). The taste of coconut is very mild, and actually complements the liqueur and the chocolate quite nicely. It's more the texture of coconut that I really can't stand, so I was happy with this combo. Comes between plain Raisin & Nut and Vanilla Liqueur Truffle.

Join me next week for a third interlude upon my return from Munich! (Yeah, I know, too many interludes. But trust me on this one. I could describe the intervening time to you, but it would perhaps be even more boring than experiencing it first hand.)
Posted by George Walkden at 6:33 pm No comments: