Last weekend I scooted off to Paris to visit Jen 'n' David. The Thalys service was used, a rather ridiculous train service that goes directly from Aachen to Paris in just over three hours, only stopping at Liège and Brussels. A good time was had by all, I think. I stayed at David's wonderful flat, and we wandered about Montmartre, the Marais, the Champs Elysées, the Cité des Sciences, the Jardin du Luxembourg and Gare du Nord, as well as having a few rather wonderful meals. Here are some photos: 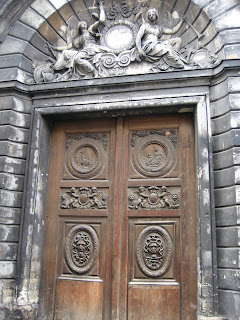 A door in the Marais. All doors should be like this. 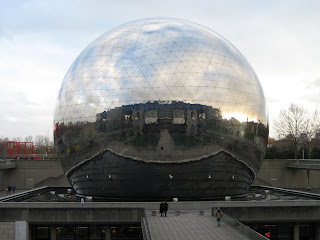 The Geode. A really big, reflective ball at the Cité des Sciences. 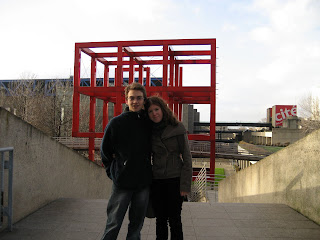 David and Jen in front of a red Thing at the Cité des Sciences. 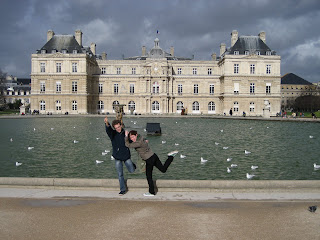 David and Jen being statues at the Jardin du Luxembourg. I also have a movie of this, taken by accident while fiddling with the camera, which is quite amusing. Email me if you want to see it (or, in the case of David and Jen, if you're prepared to pay good money to prevent me from sending it to anyone else)! 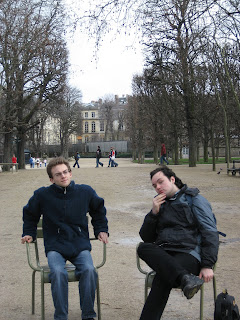 David and me looking "pensive" in the Jardin du Luxembourg. David seemingly trying to avoid actually sitting on his seat. There was probably water on it.

This weekend is the closing weekend of the Karneval, an event I mentioned earlier in my blog. Monday is Rosenmontag, a day where, instead of going to work, everyone in Nordrhein-Westfalen dresses up as pirates and Red Indians, gets completely rat-arsed and then lies paralytic on the streets waiting for the police to come and clean them out of puddles of their own vomit. There's also a parade involved somewhere, I'm told. Personally, I'm going to go to work and take my chances with a few translations. Yes, I'm a wimp.
Posted by George Walkden at 5:04 pm

All doors should be like that? Postman Pat would have a nervous breakdown...