Gave a keynote talk at a really big conference (virtually, unfortunately). Got vaccinated against COVID-19 (double AstraZeneca with a Moderna chaser).

Did you keep your New Years' resolutions?

I didn’t make any, which was wise, as I wouldn’t have kept them.

Have you any resolutions for next year?

Pay more attention to my health.

Did anyone close to you give birth?

This year, I don’t think so.

Did anyone close to you die?

No - though several caught Covid.

What countries did you visit?

Austria, Belgium, Denmark, France, Germany, Italy, Monaco, San Marino, Slovakia, and the UK. Not bad for someone who didn’t leave Germany in the first half of the year.

The ability to continue our syntax social at Seekuh without danger or fear.

What date(s) from 2021 will remain etched upon your memory, and why?

What was your biggest achievement of the year?

Something that had best remain under wraps, for now, I’m afraid. But other than that: restoring and extending the model railway in my office! There is a new bridge and tunnel that I’m looking forward to showing you.

What was your biggest failure?

I lost my iPad! Fortunately I was able to get it back again.

Did you suffer illness or injury?

This year I’ve been remarkably healthy. The sickest I’ve been was after my first dose of AstraZeneca, and that lasted less than 24 hours.

What was the best thing you bought?

Travel tickets! Specifically, the ones to Bratislava. Too long without convoluted European train adventures!

The good folks who set up a new series on historical linguistics with Language Science Press. Also, all my wonderful PhD students.

Whose behaviour made you appalled and depressed?

Where did most of your money go?

This year, quite a lot of it’s gone into my mortgage.

The ability to travel again!

What songs will always remind you of 2021?

Compared to this time last year, are you:

What do you wish you'd done more of?

Repeated now two years in a row: “Real relaxation activities, i.e. hiking, cooking, washing things. I’m bad at relaxing.” Even when I have complete control of my own time and nowhere else to be.

What was the most embarrassing thing that happened to you in 2021?

Who did you meet for the first time?

Nice people at Míšakemp 2021 on Mors, Denmark. A couple of cool English linguists in Konstanz.

How many people did you kiss?

How many one-night stands did you have?

What was your favourite TV programme?

What was your favourite film of this year?

Slightly slower on games this year than last. In the first half of the year, I played Cyberpunk 2077, which was good (think GTA but with more body-modification and Japanese people) but inevitably didn’t live up to the hype, as well as being bugged to hell. Another new game was Life is Strange: True Colors, more of a narrative/puzzle offering. I also replayed Shadowrun: Dragonfall agaaaain, and the classic Wesnoth campaigns Invasion from the Unknown and After the Storm, as well as Dragon Age II (agaaaaaaaaain) and most of Dragon Age: Origins. Overall, I probably got the most fun out of the Wesnoth campaigns.

What was your greatest musical discovery?

How would you describe your personal fashion concept in 2021?

What kept you sane?

The prospect of travel and in-person teaching.

What did you do on your birthday, and how old were you?

I was 36. It was right after DiGS, which I organized, so I don’t remember much - I think I slept a lot, ate cake, and had a birthday Zoom call with friends. 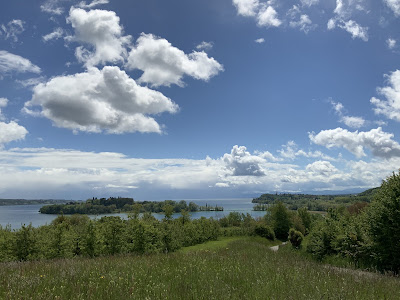 How did you spend Christmas?

At home with the folks in Derbyshire.

What would have made your year immeasurably more satisfying?

No pandemic. Or at least no fourth/fifth etc. waves.

Which celebrity/public figure did you fancy the most?

It was a poor year for celebrity-fancying.

What political issue stirred you the most?

The German general elections this year were a bit of a rollercoaster, though I wasn’t allowed to vote. And the outcome was a lot better than it could have been.

Who did you miss?

I got to see a few people that I hadn’t seen in a long while, which was nice. But I missed Michael Walkden and Rachel Fritts in particular.

Do you hate anyone now that you didn't hate this time last year?

Better than 2020, on pretty much all counts.

What was your favourite moment of the year?

I very much enjoyed Míšakemp in Denmark - playing table tennis, drinking cans of beer, and scooting about on foot in a remote landscape. Visiting Southwold with David & Fi was nice too, as were my three weekend breaks in Bratislava, San Marino and Monaco.

What is a valuable life lesson you learned in 2021?

You don’t have to be particularly good at something to enjoy it, and vice versa.